On this page I provide the source code and executable files of two projects written by me in the years 1998-2000 with the "Borland C++ 5.02" compiler and with the "Borland Object Windows Library" (OWL). The compiler is no longer supported, as is the above-mentioned OWL library. Part of the source code was forked by some programmers and inserted into an Open Source project under the name "OWLNext" - this is the link of the Internet site.
My two following projects are no longer supported by me.

The ButtonAp Release 2.0 is the second release of a testing application that uses the OWL gadgetry subsystem like Button Gadgets, Text Gadgets, Divider Gadgets and other gadgets. Parts of the code of the first release have been rewritten to support the registry instead of the default .INI file, to support the capability to store and reload several parameters and options of this application. For example when you run this application, the following registry keys will be created in the tree "HKEY_CURRENT_USER\Software\JoParrello\ButtonApp32\2.0":


Those keys are created in Win32 target mode. The Win16 target app has the keys in another tree, but they are the same. The peculiarity of this application is that it runs well both under Windows 3.1 and Windows 95, without problems or limitations. One of the greatest feature of OWL is that it can "hide" the differences between Win16 applications and Win32 applications.
All this code was tested using CodeGuard, both under Windows 95 first release and under Windows 3.10.
The CodeGuard reports an error due to "GetSubMenu" and "GetFTime" functions. To avoid these "perpetual" errors, I include a .CGI file, a CodeGuard configuration file, that prevents those errors. I must thank CodeGuard as it discovered several bugs and problems on classes, like in JPFlatTextButtonGadget and other classes.

With this project it is possible to have:

A new feature of the release 2.0 is the Flat Color Picker, displayed in the images here below. In the left image you can see the color picker window just opened by the FlatColorPicker gadget. On this picker window you can choose a color. The chosen color is currently displayed as pressed (in the image it is "red"). In the second image you can see the FlatColorPicker gadget in its normal position, and the chosen color is painted inside the ellipse under the "P" char. 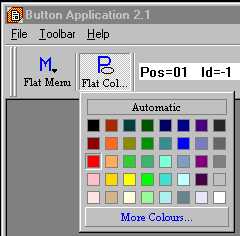 Another feature of the ButtonApp, is the toolbars' customization dialog. As you can see in the image here below you have available buttons that can be inserted in the currently listed toolbar. Besides you can change the current listed toolbar, you can restore all toolbars and to move up or down a single gadget. 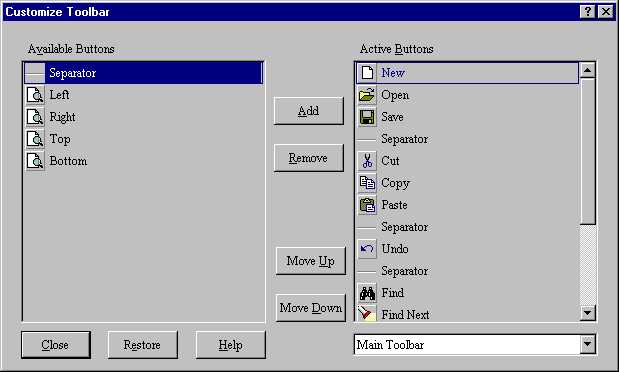 In the following image, you can see control that can be a flat button gadget.

In the following image, you can see flat toolbars with thin margins and horizontal lines.

In the following image, you can see an overview where everything is flat.

Version 1.0 of the RichEditApp project is the updated version of the sample project provided with the Borland C ++ 5.02 compiler and allows to have a minimal word processing program using some classes I wrote for the previous ButtonApp project. In the following image, you can see an overview of this project.

This SOFTWARE PRODUCT and any related documentation is provided "as is" without warranty of any kind, either express or implied, including, without limitation, the implied warranties or merchantability, fitness for a particular purpose, or noninfringement. The entire risk arising out of use or performance of this SOFTWARE PRODUCT remains with you.
In no event shall the author of this Software be liable for any damages whatsoever (including, without limitation, damages for loss of business profits, business interruption, loss of business information, or any other pecuniary loss) arising out of the use of or inability to use this product, even if the Author of this Software has been advised of the possibility of such damages.
This SOFTWARE PRODUCT is released as FREEWARE. No charge and no registration are required.